Inclusivity, Usability, and the Application of Personas for Technology Policy Design

Theatre and Robots - Envisioning Interdisciplinary Collaborations Beyond the Stage

Next Generation Wireless Device Adoption and Use among Individuals with Disabilities: Findings from a National Survey of User Needs, 2019-2020

SWAN 2.0: Research and Development on a New System for Wearable Audio Navigation

Augmented Reality as a Design Tool

The project is exploring the use of Augmented Reality and Tangible Augmented Reality for assessing the usability of products and services. The goal is to understand barriers and factors that impact their accuracy so that designers can confidently use them to reduce the time and cost of improving wireless product designs.

Our project is a proof-of-concept study that explores the feasibility of robot respite for older adults who are caregivers of adult children with intellectual and developmental disabilities (IDD). It was developed to address the strain of caregiving for older adults, by leveraging the capacity of a humanoid social robot (‘Pepper’) to engage their adult child with IDD in an interactive, relational capabilities-building learning scenario.

The Emergency Inclusive Lifelines Project developed wireless communication protocols and interfaces for adopted and emerging wireless technologies used in all stages of emergencies (before, during, and after emergencies).  Specific projects characterized the most accessible emergency notification signaling for emergency alerts for people with sensory disabilities.  Further, we have developed interactive tools to compare WEA comprehension on multiple platforms.

The Wearable Technology Designer’s Web Tool is for designers to use at the beginning of the design process. The tool presents a series of questions, as the designer provides answers about their project, the tool compiles a set of design and accessibility considerations along with a heat map of where on the body their wearable device might be located. The tool also alerts the designer if the choices they are selecting will impact any users with disabilities.

The Tactile Graphics Helper (TGH) project is a smartphone/tablet app that uses the device’s camera to track a student's fingers as he/she explores a tactile graphic and allows the student to gain clarifying audio information about the tactile graphic without sighted assistance. 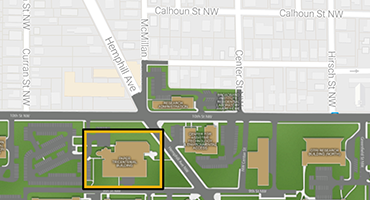